As there is a clear and present danger to same looming upon Trump, its cruel harbinger (you know, what with gay people being concentrated in camps for sexual reorientation [read torture] in Nations otherwise thought remotely civilized), it may be a time to offer this again: 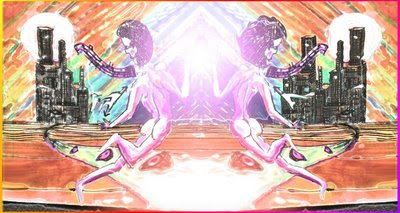 On Dumbledore
by Alfred Lehmberg


Love. Our dearest tragedy. It is cherished or abused. One makes it; it is all we have! Love is hard to disabuse. But, we betray biology, it seems it's "sequenced" out... ...at long, long last, we've come to find... it's Love we do without!
.
Love... it's carved in stone with bleeding knives; Love's dancing on the wind. Love makes a burden easier, or it adds to it, my friend. Though portrayed in tastes and flavors that may dance upon the tongue, Love fills a mouth with ashes where the heart is torn and flung.
.
Love gleams in different colors that we break up into grades. Love's crimson, white, or golden; Love endures, or dulls and fades.
.
They call the crimson "carnal." It's the marrow in your bones; if white, it's known as "philos"—it's a cleaner octane, Holmes; If golden, it's "agape"—the highest form of Love.  It's selfless and it's perfect—and the rarest (push to shove).
.
It takes all three to make us whole—to make us more complete... ...but we would judge Love's value, and would qualify Love's reach! Oh, this is where we HUGELY err! We dictate and pronounce. We ridicule, demean, and shame. We disqualify—denounce!
.
We'd prohibit and we'd cancel, we would legislate our drives! We'd complicate the issues. We'd produce our sad despised!
.
We *append* to sex and preference "connotation" gone awry—and contrive a lesser value like we *knew* the reason why! Well, we don't know, though we'd presume the "wisdoms of convention," and cause a person's torment based on cant or crass invention.
.
Now I don't write with scented inks. I'm just not wired that way. I'm making no apology, but showing distance, Dave! See, I had listed those I've met in decade's factor-five... perceive they're not the problem; they're a blessing, that's no jive.
.
They're not all gay—our movie stars, our poets and our clowns, our musicians and our artists, and our dancers of renown. They're not ALL gay—philanthropists, philosophers, or mimes—our nurses tending selflessly, some sports folk of our times. They're not all gay—our stylists... who decorate the day, or work out all the detail in a layout they have made.
.
But where's the twin admission that would keep us most contented? That here they are the lion's share, and so OVER represented!  ...And yes they're there in numbers that provide the art we share, compelling our salvation and the triumphs we could dare!
.
I think of all the people with an impact on my life, and find so many "gay blades" who have qualified my pride. These are teachers, artists, leaders, and some friends I, too late, made. They are pilots, soldiers, warriors—it's to them my pride is paid!
.
Near the end of my existence, when the dues are finally in, I owe a little gratitude—a little loyalty, my friend. I wished I'd spoke up sooner, so that you'd have had more VOICE. I regret that I belittled you when I'd thought you had some "choice."
.
If a few of these professionals are, in fact (heh!), proudly gay, then a better class of person swells the ranks of them, I'd say! It's there—seems more intelligence. It's there—seems greater style—seems more imagination, more artistry sans guile...
.
It's there, there seems more gracefulness, and (Yes!) that rarest kind of Love. It's there, there are more butterflies, more humming birds—more doves? It's THERE a valued world turns, the one that should be made... as hearts are opened up to find their bills have been put paid!
.
If true, no condemnation—no indictment is returned. If true there is no reason to assign some blame or spurn. If true (?), yes, CELEBRATION there's your tendency to share! You have eclectic talents I appreciate, mon frère.
.
I see your contribution. I acknowledge right to *be*. I make no value judgment; just prefer you free as me.
.


It's not the gay to be forgiven with nothing to forgive. Ironically, it's those persecuting proud looks in mal-informed judgment requiring all of that...

Still, friendless I'd rather embrace choice, tolerance (diversity as an intellectual force multiplier), and love, in all its shades and grades—forgetting for a moment that its PROHIBITION—biblical or otherwise—and foundationless persecution... are so much specious nonsense.  Gay fellow consciousness mote, I don't just tolerate your existence, I celebrate it. Full stop!

No. Your contribution seems to far, far outweigh your "errant" so-called "detriment," and has always done so. Sincerely, live, do, and be.

Bigotry—and gladly—force-multiplies ignorance; ignorance fosters its own lack of consequence; a silence on same must provoke an irrelevance; consequently, I'm compelled to a significant defense of gay sensibilities, to act responsibly.

Get used to it.  There will be no apologies from me. Contrary thinking can just step off with no second thoughts.

It Matters Not?
by Alfred Lehmberg