My consciousness is but a mote
inhabiting machines
which are used for transportation
in a mind's enchanted dream,
and Transmitted, then Projected
in a light-speed plasma dance,
it is tracing out this poem
you could read; so, take a chance.
.
It's not unfair advantage
that this wishes to pursue,
and it's not prevarication
that this switches out for truth.
It is just a varnished wailing
of a monumental "blues"
we're contrived to keep detailing
as we're served obnoxious news.
...And stuff comes out in verse, you see,
that comes no other way...
It transcends the merely textual.
...It's been known to save the day!
...And these are days protracted
which have gone on far too long...
These are what provoke the verse
to make us sing these songs!
.
...Remains, the sky is filled by *lights*
seen with opened sober eyes!
I'm "told by *God*" to "look away"
from "what I should despise."
The "world" and my "body"
are the stuff of Satan's lies?
...But that keeps our children starving,
and it muffles ... drowns their cries!!!
.
People I respect report
that "there are lights above!"
Not meaning God or angel,
but an ET sure enough!
These send a cryptic message
we're not getting—we don't try.
If we got that cryptic message?
Scurvy memes begin to die!
So, they keep us in the dark,
misinformed, so baldly paying...
facilitating psychopaths
who'll thrive as we're betrayed, then!
.
...One's science is a 'club'
with monstrous dues
which will be paid:
to condone bereft fidelity,
there are "good points!" made to fade.
Science treated like the "be-all-end"
—and that's what they've depicted—
when the scope of it's too narrow,
shallow, numbing, and conflicted!
.
...And, yes I know it's fueled and fired
our exponential rise!
...And, yes, I know its *wonder*
is so hard to criticize!
...And, yes I know it's science
that we shan't give up for Lent
—but it's lacking all humility
so must suffer our contempt!
.
Unfettered by corpocracy
we'd live in crisp new skies!
We'd soar to distant stars
in spacious ships
that we'd contrive.
Our globe's a rendered garden,
and we'd thrive upon our moon!
We'd travel with new elegance
in vast ships like huge balloons.
.
We'd taste the satisfactions won,
undreamed of, friend, just now!
Our stress would lose intensity;
we'd be happy motes; here's how!
Our hate, which was so pointless,
so destructive, gross, and vile?
In its place, respecting reach and grasp!
...That "grasp" bereft of guile!
.
Much status quo is "Satan Spawn,"
frankly good for just the few;
take a chance at least to try...
what's offered up as new!
.
Our vistas are expanding now
with all deliberate speed,
and the truth gets hard to hide regards...
it's got so hard to breathe!
There are asteroids like buzzing bees
around insentient heads.
...Well known is they could hit us, friend,
to strike us all quite dead!
.
Some many, many persons,
people famous and profound,
...said abducted by the saucers
...that do land upon our ground.
Lights leap and flash fandangos
in our day and nighttime skies,
yet we're denied a reckoning,
and I'd, of needs, know WHY!
.
I say that we should ask them:
though the truth itself portends.
I'd divest from any falsehood
which portends our flawing trend.
I'd abdicate all errancy
before I paid its loss,
though fortune flew on righteous wings
and I'm condemned and lost.
.
...Though, reward, I have been thinking,
is the THINKING, then, itself.
It's the pay for all your labor,
for the enrichment of yourself.
...To take a deep and cleansing breath
believing you live free!
...To lift the visage of your face!
...To leap from off your knees!
...To leave behind all worry
on the substance *stuff* is given
—too many suffer now for that.
This shall not be forgiven!
.
There is small need for psychopaths
hard-wired to baldly steal;
and every reason for respect
for folks who would be real!
It's why we pay our taxes
...not to fund the corporate pork;
not to pay for one's religion
...not to stress us while we work!
The truth's a glad reminder
of respect, of needs, quite real.
It provides a chance for ways...
to any righteous deal!
.
My consciousness is just a mote
suspecting life's a dream.
To many, it's a nightmare;
life is futile, harsh, and mean.
Though, think of our embarrassment
where it's shown we've misbehaved
—and our watchers, truly watching,
think us evil and depraved.
. 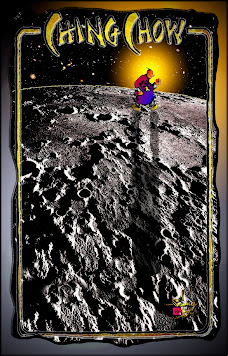