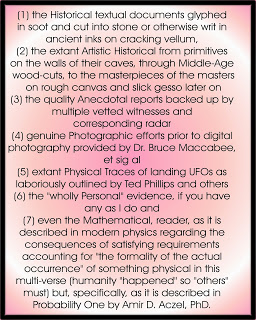 That doesn't matter remember, TRUFO or True UFOs only have to evidence themselves once in those seven vast categorical seas. Numerous items from our purposely contrived and foggy history provoke similar pointed questions, forgetting for a moment that this particular one was dismissed by writer Samuel Rosenburg as unfounded invention!
Ok...
His—too easy—dismissal was based on an alleged (and unsubstantiated) inexpert translation of an ancient document the Catholic church reports as currently "lost." One critique, Rosenburg's scoffing conclusion, was as dictated to Rosenburg by that SAME Catholic church cloaked in the, ever assumed, faultless integrity of an "infallible Vatican."  The reader should be feeling some unease. Infallible, this writer's south end moving north.
See, even THERE the reader can hear the weak admission that some artifact existed, even if it cannot now be produced! Is this naught but just one more piece of the ongoing puzzle lost in the convenient shadows of the planned general ignorance? Such might be so.
So, what IS this alleged artifact?
Roughly, but certainly no less than three thousand, five hundred years ago, in an unremarkable Egypt far removed from us and further distorted by murky academic antiquity, there once ruled, as it's writ, the minor Pharaoh Thutmose III—also unremarkable (at least as far as Pharaohs go).
THIS Pharaoh, as it happens, fortuitously continued the serendipitous tradition of making a durable record of the events of his time in a manner that would (it was naively hoped) be CRYSTAL clear to the presumed unending chain of forthcoming future Pharaohs. Writing was a serious business back then, it was treated with more respect.
It is plainly suggested that he made (or had made) the following recording, inked deeply into the rough surface of one stunning sheet of startling, if lost, papyrus! The reported translation of the stylized figures in these curious hieroglyphics follows:

In the year 22, the third month of the winter, in the sixth hour of the day, the scribes of the house of life found that it was a circle of fire that was coming in the sky . . . its body was one rod long by one rod large. It had no voice, and the scribes so advise the King. Some days pass, and lo, they are more numerous than ever. They are shining brighter than the sun in the sky. The army of the Pharaoh looks on with Him in their midst. It was after a respite that the circles flew up higher and disappeared to the south. It was a marvel never occurred since in this land.

Other accounts of this intriguing document talk about a strange "stink" that the "fire rings" make in the air as they dash around (foreshadowing Flatwoods?), and further describe the Pharaoh as futilely chasing the dazzling circles from below in his horse-driven war chariot, slinging pathetically ineffective bolts at them as the fire circles darted effortlessly past.
Perhaps exhausted, finally, from their seemingly ignored exertions, the sweating Pharaoh and his fearful men stand at last looking up at the indifferent saucers with their mouths hanging open, effected by equal amounts of enchanted wonder and abject terror. Such is reported so.
In a sidebar, one could speculate that the personal stock of this apparently fearless Pharaoh went WAY up with his relieved troops at the no harm conclusion of the terrifying, albeit one-sided, exchange. They could ALL call themselves very brave that day, and, this writer submits, likely did.
Returning abruptly to the mysterious document suggesting this astonishing occurrence, this writer questions what truly underlies the social mechanism USED to preclude a document, of this enigmatic type, from being brought to light immediately and with all deliberate speed! What hides in the shadows of that ridicule permeating the interested discussion of such a document, and the larger reality that it heralds? Much likely hides in that ponderous ignorance we continue to consciously assume like a smothering cloak, to our peril.
Consider some idle if reasoned speculations. Father Alberto Tulli was a man who did not want to be laughed at. Father Alberto Tulli was a man who did not want to compromise or contradict the untested faith, assumed fidelity, and convenient sensibility of his order and its institution. Father Alberto Tulli was a man willing to stuff an oddly smoking gun into an out-of-the-way drawer to further postpone, perhaps, humanity's rendezvous with its more secular destiny?
Father Alberto Tulli was a... coward (yes) in the most regrettable sense of the word, was not motivated by adherence to any strict (otherwise fawned over) scientific method, and was a mere stooge for an outdated, probably criminal (certainly unethical), and decidedly back-stepping world view? Yes.
This writer knows that he would be judged in a similar fashion upon committing the so described, or some analogous offense. What's gravy for the goose, and all that... this writer appreciates consistency only because TRUST can sometimes be born of it.
This writer challenges, with outrage, that "smoking guns" remaining hidden, and ACCUSES the owners of these drawers (into which these smoking guns are so smugly ensconced) of the aforementioned regrettable cowardice. J'accuse!
With fervent anticipation, this writer envisions a time when we will, collectively at least, more typify the courageously advancing and forthcoming seeker over the cowardly retreating and obfuscating shirker. The seeker—the one willing to run that gamut of wounding negativists to touch the truth on her shining face. The shirker, of course, is described everywhere else in this essay.
Concluding, this writer asks WHEN (and even if!) we might all ever learn to laugh at the laughter we SHOULD be laughing at! That brand of laughter alluded to is identified as toxic and that which comes from the one with substantially less COURAGE than the one PROVIDING the mal-alleged amusement. It is the laughter born of a whistle past a graveyard. It is the laughter born of those unable to face the selfish fears of their own convenient manufacture.  Turgid and turbid and not a little rabid.

Additionally, this writer wonders when we might begin to compromise and contradict that which deserves compromise and contradiction—even bite the feeding hand which offends so deeply and egregiously that it CALLS OUT to be bitten?  How much social infidelity and inconsistency are a rank and file expected to bear?
Some see evidence of the beginning of that furtive hand gnawing, a coming revolution, and assuming the patented Dan Quayle deer-stunned-by-headlights "look" on complacent faces—pretend they don't know why or how.  ...But they DO know, we all do, of course, know why and how.
Those answers don't have to be searched for, reader; they have but to be faced!  How much is a betrayed and abused rank and file expected to endure from their own officiality, anyway?