George Carlin Had It Wrong 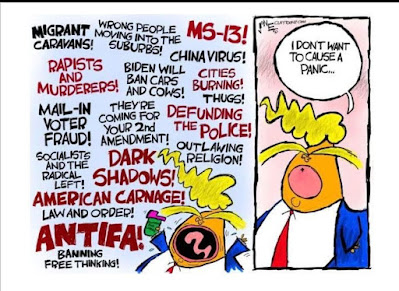 George Carlin Had It Wrong...

...I wrote something before the last Presidential election cycle (2016) that could be awarded "First Place" for its spot-on call as regards one DJT. Worst fears realized...
This was when he was a mere comic buffoon and reality TV star, before revealing the "TЯUMP" as he has come to be known. For the "prize" alluded to, we must imagine a contest concerned only with being able to take ZERO pleasure for being correct on an issue. Any issue. Any gloating is impossible, you'll agree. I loathe my correctness and wished I'd been entirely wrong.
No. No, not where current National priorities, just to start, are but focused fixation on getting Betsy DeVos, et sig al, bigger and more luxurious boats. These would be awards that the hyperprivileged advantage themselves of, a result of the wholesale manslaughter (murder?) of hundreds of thousands of working Americans in a pandemic, and THEN trying to cancel the healthcare for millions of people as a cruel accessory! Insult after injury.
We must add the cruelest and most horrific move from a Constitutional Republic evolving humanely for two centuries, plus, to a deregulated oligarchy sans all responsibility or principle and helmed by Religulous imbeciles and soulless psychopaths for their profit and gain! These are working furiously to abuse and betray honest Americans, even now!
It has even become imaginable to these monsters that they regress us to the 1950s, all suffering, racism, and sexual bigotry intact! Speaking of suffering, racism, and bigotry, sprinkle in, then, the wholesale kidnapping and handy destruction of the lives of largely innocent people at our borders, most of these just yearning to "breathe free" in America's, purported, "better life." You know, the one we SELL them on their TVs!
Kids in cages. It's become a real thing apart from exaggeration or inflation. Squalerous conditions fomenting and facilitating future enemies of the United States... you know, that Country who took their parents away... Those enemies are on US!
Consider, then, the unprecedented tragedy of an unconscionable betrayal where a United States President is ambivalent (at best!) about Russian enemies of the United States paying bounties for the SCALPS of American soldiers! No... gloating would be as inappropriate as it is impossible given this list of gross infidelities, surreal atrocities, and political malfeasances that can just go on and on... ...four more years?
So... the upshot? VOTE where you can, folks. It matters this time... it mattered LAST time... It's a good indication that it has mattered every time. See, George Carlin had it wrong.
"There's a CLUB" all right, and it's your VOTING that gains you a membership! See, it's VOTING to facilitate the Death of TЯUMPCO and its diseased, hypocritical, and traitorous Right Wing (NAZISM, and Godwin's be damned)! It's voting! Vote!
VOTE... 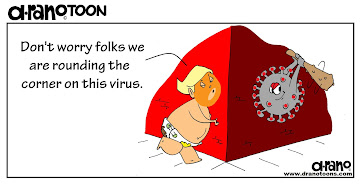